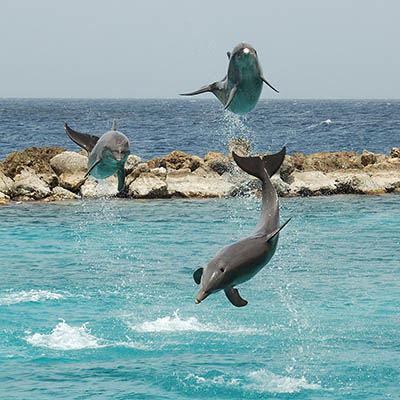 90 miles north of Venezuela lies Curaçao, an autonomous country within the Royal Dutch Kingdom of the Netherlands and the “C” island in the ABC chain. Curaçao lies outside the hurricane belt and has warm, sunny weather year-round with very few showers.

A melting pot of Afro-Caribbean, Dutch, French, Latin American, Asian, and Jewish heritage, Curaçao derives its culture from the rich diversity of these groups. You can feel Curaçao’s culture in the pride and passion of the people, the mouthwatering foods and the beat of their Tumba music.

Curaçao’s architecture is colorful and vibrant, reflective not only of styles from Europe and the Netherlands, but also from the Spanish and Portuguese colonial towns and from towns throughout the Caribbean region with which Willemstad engaged in trade in the seventeenth and eighteenth centuries.

Curaçao has quite a picturesque harbor with the towering Koningin Julianabrug or Queen Juliana bridge, one of the highest vantage points on the island, offering a panoramic view of Punda, Otrabanda and the Schottegat. While below, the Queen Emma Bridge – a pontoon (floating) bridge that connects Punda and Otrobanda in Willemstad – is hinged and opens regularly, allowing ships to pass through. Both bridges are tourist attractions in their own right. A drive across the Queen Juliana or a stroll across the Queen Emma is certainly a must.

While on Curaçao you can choose to soak up the sun and swim at one of over 35 spectacular beaches along its southwest cove, go snorkeling or take a dive among the amazing coral reefs, walls and sunken ships. These dive sites are protected from strong currents.

Several museums display the island’s rich history and inherited traditions. The Maritime Museum shows how Curaçao’s strategic geographic location and natural harbor made it a major seafaring and commercial center.

Being on Curaçao gives you an unexplained warm, welcoming feeling of belonging. A feeling you want to share – excitement, anticipation, adventure, joy and romance. Curaçao’s arms are open and waiting to welcome you. You can see and so it all, or just sit back and enjoy a sumptuous meal, sip on a Blue Curaçao (the local liqueur) and enjoy the island with family, friends or just that special someone.

Curaçao is an ideal wedding venue; if you choose this option, you will have to pre-arrange a number of issues and follow certain procedures. This ensures a carefree wedding and honeymoon.

As a non-resident of the island, you can get married here if you meet the following requirements:

Depending on your personal circumstances you might be requested to provide additional documents. You will have ample time to arrange for these documents.

Within two weeks after the Civil Registry Office has received and examined your documents, you will receive a message stating that all documents submitted are in order. If not, it is then determined whether the planned wedding date and time is still feasible.

Your marriage will be officially announced on the first Saturday after your marriage application and the related documents have been approved.

The total cost for the above documents is approximately US $176.00.

To learn more about Curaçao, please see the important links below:

How to Get to Curaçao

Places to Stay in Curaçao

Things To Do in Curaçao