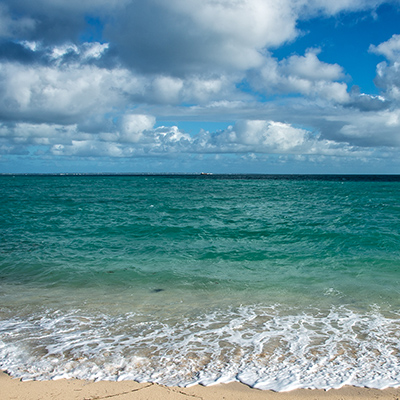 St Martin is 21 square miles (54 sq km) of French territory with a strikingly French way of life. The currency, language, goods in the shops, escargot and frog legs in the restaurants and the pastries and breads in the bakeries, cars, fashions and the sheer style – it’s all unashamedly French, with the added Caribbean attraction of superb beaches on which to spend the hot, sunny days.

Please note that both St.Maarten & St. Martin exists on one small island. The Dutch half the island and the French the other half. The Frech side is widely known as the more formal side of the island. You can rent a car and drive the entire island both Dutch/French without any problems.

Things To Do in St. Martin

Fort Lois: built in 1789 it is the main historical building with a wonderful view overlooking the capital.

Paradise Pic: the highest point of the island 1,400ft

“On the Trail of the Arawaks” Museum: is a historical & cultural patrimony of the island.

The Butterfly Farm: where you can walk amongst rare & exotic butterflies.

Orient Beach: where clothing is an option and the premier location for windsurfing, jet skiing and even parascending!

Shopping: Along the Harbor in Marigot you will find tons on wonderful boutiques filled with duty- free jewels and other high fashion merchandise. Return here for Market Day when the vendors fill the lots with everything you could possibly imagine, a hagglers dream! Also visit the Marina Port Royale. It’s an amazing shopping complex, including French & Italian designers shops.

In the village of Grande Case fine eateries are awaiting your arrival. Amongst the “culinary palaces” you will find your “lolos”, your standard beach shack where you can feast on local cuisine for around $10. Visit the lowland area called Sandy Ground to Marigot and Nettle, the restaurants are spectacular.

The marriage of foreigners on the territory of Saint-Martin is now regulated by article 58 of the law n°2009-594 for the development of the Overseas Departments and Territories of May 17, 2009 as well as the regulations of the Civil Codes relative to the “act of marriage” articles 63 to 76 and those relative to the qualities and conditions required in order to enter into a marriage “articles 144 to 164”.

The two future spouses must be of foreign nationality and not be residents of the national territory (the Republic of France)
The two future spouses must be at least 18 years of age and meet the fundamental requirements in terms of marriage on the issues of free consent and the prohibition of marriage between certain persons (see the civil codes).

No prenuptial agreement is required.

The marriage ceremony, the certificate of marriage and the certified copies are free. Only the translator/interpreter is at the charge of the future spouses.

A letter that has been signed and dated by the future spouses and addressed to the President of the Territorial Council requesting that he apply article 58 of the Law n° 2009-594 of May 27, 2009 on a specific date, which should be indicated in the letter.
A complete, unabridged copy of a birth certificate, that is dated no more than six months previous to the date of submission, must be provided by each of the future spouses. The birth certificate which is delivered by a foreign authority must be translated in conformity with the applicable regulation of the country of origin.
Proof of the identity of each of the future spouses by means of a valid passport and, if necessary, by a visa (or the request for a visa) when it is required for the person to stay on the territory of the Collectivité of Saint-Martin.
The surname, names, date and place of birth of the father and mother of the future spouses.
The surname, names, date and place of birth of the witnesses, as well as their addresses and professions.

The Officer of the Civil registry, “can request” of the diplomatic authorities or the Consulate that is territorially competent to proceed with an interview of the future spouses, as is provided for in article 63 of the Civil Codes. By the authority of the competent diplomatic authority or Consulate that is territorially competent, it should be understood, the French Embassy or French Consulate of the country or territory of origin of the future spouses.