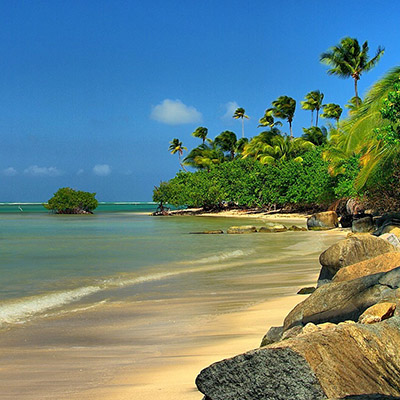 Puerto Rico is romance. A moonlight walk along the beach; A swim in a phosphorescent  bay; a stroll along a rain forest trail; a slow dance as the sun sets; a horseback ride through a coffee plantation; a carriage ride through the Pearl of the South create the perfect backdrop for your romantic beginning.

From opulent hotels to delightful restaurants and sizzling clubs, from wind surfing to lazing in the sun, from gallery hopping to serious shopping, No waiting period, but a blood test and license from the mainland must be authorized by a local doctor before marrying; $25 or less in fees.

Puerto Rico has the perfect settings for weddings and honeymoons.

Things To Do in Puerto Rico

Sights & Attraction: On one small island, you can experience years of history and four distinct cultures.

Adventure: There is so much to see and do on this small tropical volcanic island, these are just a few of the popular ways to experience Puerto Rico’s natural wonders.

Beaches & Watersports: If you just want to relax or have a spectacular adventure in the great big blue it is all here in Puerto Rico.
Best beaches for the young and the restless are as follows

Best beaches for a secluded afternoon.

Scuba Diving & Snorkeling: The average ocean temperature is 81ºF and underwater visibility averages from 60 to 75 feet near the beach. Offshore it is easily 100 feet. Puerto Rico is a divers dream!
The most popular & exciting dive sites are as follows

For snorkeling there are shallow reefs off the sands of San Juan, Dorado & Humacao

Canoeing & Kayaking: Run the rapids on the Tanam River or gently row down the Espritu Santo. Ocean kayaking is phenomenal along Vieques, Culebra, Ballenas bay/ Guanica and Fajardo.

Fishing: Great year round. However the winter runs roughly from October to early March, is the best season for dolphin, dorado, mahi-mahi, wahoo, white marlin, yellowfin tuna and an occasional sailfish. Blue marlin are easy to catch in the summer, but are always returned to the sea.

Other Aquatic Activities include but never limited to:

These are the courses currently open to the public:

Shopping: Puerto Rico is a shopper’s paradise with a lot outlets of famous brands. San Juan is actually the island’s shopping mecca. You can find great deals on jewelry, fashions, crystal, and china. Shopping for local crafts can also available, in many cases you can watch the artists at work. Plaza Las Americas, the island’s largest shopping centre, also situated in San Juan. It features over 300 stores selling everything from pottery to designer clothing.

Night Life & Entertainment: Puerto Ricans know how to party, their discos, bars and theaters rival those of other big city but with a flare all their own.

Puerto Rican cuisine has its roots in the cooking traditions and practices of Europe (Spain), Africa and the native Taínos. In the latter part of the 19th century, the cuisine of Puerto Rico was greatly influenced by the United States in the ingredients used in its preparation. Puerto Rican cuisine has transcended the boundaries of the island, and can be found in several countries outside the archipelago. Basic ingredients includegrains and legumes, herbs and spices, starchy tropical tubers, vegetables, meat and poultry, seafood and shellfish, and fruits. Main dishes include mofongo, arroz con gandules, pasteles, and pig roast. Beverages include maví and piña colada. Desserts include arroz con dulce (sweet rice pudding), piraguas, brazo gitanos, tembleque,polvorones, and dulce de leche.

Locals call their cuisine cocina criolla. The traditional Puerto Rican cuisine was well established by the end of the 19th century. By 1848 the first restaurant, La Mallorquina, opened in Old San Juan. El Cocinero Puertorriqueño, the island's first cookbook was published in 1849.

From the diet of the Taíno people come many tropical roots and tubers like yautía (taro) and especially Yuca (cassava), from which thin cracker-like casabe bread is made. Ajicito or cachucha pepper, a slightly hot habanero pepper, recao/culantro (spiny leaf),achiote (annatto), peppers, ají caballero (the hottest pepper native to Puerto Rico), peanuts, guavas, pineapples, jicacos (cocoplum), quenepas (mamoncillo), lerenes(Guinea arrowroot), calabazas (tropical pumpkins), and guanabanas (soursops) are all Taíno foods. The Taínos also grew varieties of beans and some maíz (corn/maize), butmaíz was not as dominant in their cooking as it was for the peoples living on the mainland of Mesoamerica. This is due to the frequent hurricanes that Puerto Rico experiences, which destroy crops of maíz, leaving more safeguarded plants likeconucos (hills of yuca grown together).