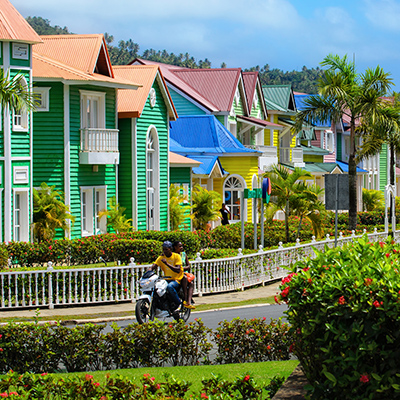 The Dominican Republic is the second largest Caribbean Island, with an abundance of activities to indulge your travel fantasy.

Location: Caribbean, eastern two thirds of the island of Hispaniola, between the Caribbean Sea and the North Atlantic Ocean, east of Haiti.

The country is quite diverse in its geography, ranging from semi-desert plains to verdant valleys of tropical rain forest. The wildlife is astounding. With 19 national parks, 32 natural monuments, number of natural reserves, marine sanctuaries and 9 protected parcels of islands, thee exists over 5600 plant species, numerous birds species and a rich underwater world. The Dominican Republic is truly an island of contrasts where rocky cliffs and mountain ranges tower to the highest peak, and valleys fall to the lowest lying point in the Caribbean.

Things To Do in Dominican Republic

What it offers for your wedding and honeymoon is a romantic backdrop provided by nature.

Many of the resorts are all inclusive including those in the picturesque coastline in the Punta Cana region.  This destination offers magnificent beaches and resorts, vast extensions of white sand clear, sparkling waters.

Santo Domingo, the capital city, boasts the Alcazar de Colon (Columbus’ Palace) the 22 room palace of Don Diego Columbus and his family.  Adjacent to the restored structure is the Alcazar Museum, which houses religious art objects.  There is much to see and do in this very large city.  And like any large city, it comes with the good and the bad.

La Romano is a very beautiful area with a dramatic backdrop to provide you with that picture perfect day.  It has the quaint Altos de Chavon (artist enclave) and a walled resort compound know for its three challenging golf courses, a polo field, horseback riding, sport shooting, tennis and a marina.  Isla Saona, off the southern shore near Bayahibe is a 45 square mile island with beautiful beaches and mangrove lined lagoons.

A brief overview of the regions is as follows:
Central:  A favorite of nature lovers, cigar connoisseurs, this region is home to Santiago, known as the cigar capitol and the Dominican Republic’s second largest city.
North Coast:  Considered the country’s versatile playground, the region offers many diverse landscapes and its beaches are a popular spot for windsurfers and kiteboarders.
North East Coast: The region is the home of the Samana Bay and a peninsula that is a popular spot for whale watchers.  It also features mountains, waterfalls and lush rainforests.
East Coast: Punta Cana/Bavaro, the most popular and fastest growing tourist area in the country is located here.  This region also contains one of the most celebrated national parks.
South West Coast: This region includes the area west of Santo Domingo, and it is still an undiscovered territory by many tourists.  The area provides a change of scenery at just about every turn.
South Central Coast: Contemporary hotels sit on ancient cobblestone streets, luxury cars park beside well worn scooters and eclectic cuisine at hip restaurants is served net to street vendors serving traditional Dominican fare in Santo Domingo, the oldest city in the new world.

The Dominican Republic enjoys warm tropical weather year round, so pack for paradise.  Do not forget sunglasses, sun block and your bathing suit.  With seven international airports and a streamlined immigration process, visiting the DR is relatively easy.  Just make sure you have a valid passport.  While Spanish is the official language, most employees in hotels and tourist spots speak English.

Dominican Republic cuisine is predominantly made up of a combination of Spanish, indigenous Taíno, and African influences. Many Middle-Eastern dishes have been adopted into Dominican cuisine, such as the "Quipe" that comes from the Lebanese kibbeh. Dominican cuisine resembles that of other countries in Latin America, those of the nearby islands of Puerto Rico and Cuba, most of all, though the dish names differ sometimes.

A traditional breakfast would consist of mangú, fried eggs, fried salami, fried cheese and sometimes avocado. This is called "Los Tres Golpes" or "The Three Hits". As in Spain, the largest, most important meal of the day is lunch. Its most typical form, nicknamed La Bandera ("The Flag"), consists of rice, red beans and meat (beef, chicken, pork, or fish), sometimes accompanied by a side of salad.

The following paperwork must be submitted:

Religious Ceremonies
For those who like the idea of getting married in a tropical setting but still want a religious ceremony, all things are possible in the Caribbean, including the Dominican Republic.  Because of the formalities of a church wedding a bit of preparation is needed.  I would strongly recommend that you have a local planner on hand to help you navigate all the rules and regulations, and also provide you with the best vendors that will make your special day a success.

For a Catholic wedding you will need to formally request the diocese in your area to contact their counterpart in the Dominican Republic.  (this is very easy as they all do meet at annual gatherings)

Church weddings for foreigners have been held at the following: